Close to your Dreams

Promotional video for the Christmas campaign of GranCasa (Zaragoza), focused on generating traffic in social media, helping to attract the public to the mall during the whole period of the end of the year.

The special socio-health situation had to be present in a subtle way along the narration, which in any case would have to revolve around the idea of the illusion of the little ones, with a Santa Claus that brings us light and happiness.

Although this type of audiovisual project, of Christmas time, is a classic that we play in VÓRTICE one year after another, on this occasion the approach was more ambitious than usual, which opened the door to a much more elaborate materialization.

Starting from the beginning, the work with the script required reducing the initial text quite a bit, from an initial length of about two and a half minutes, to the goal of one minute.

Such a pronounced shrinking always requires leaving some things out and reorienting the rest, reducing the number of shots and adapting the sequences to a later montage that will necessarily be more vivid. 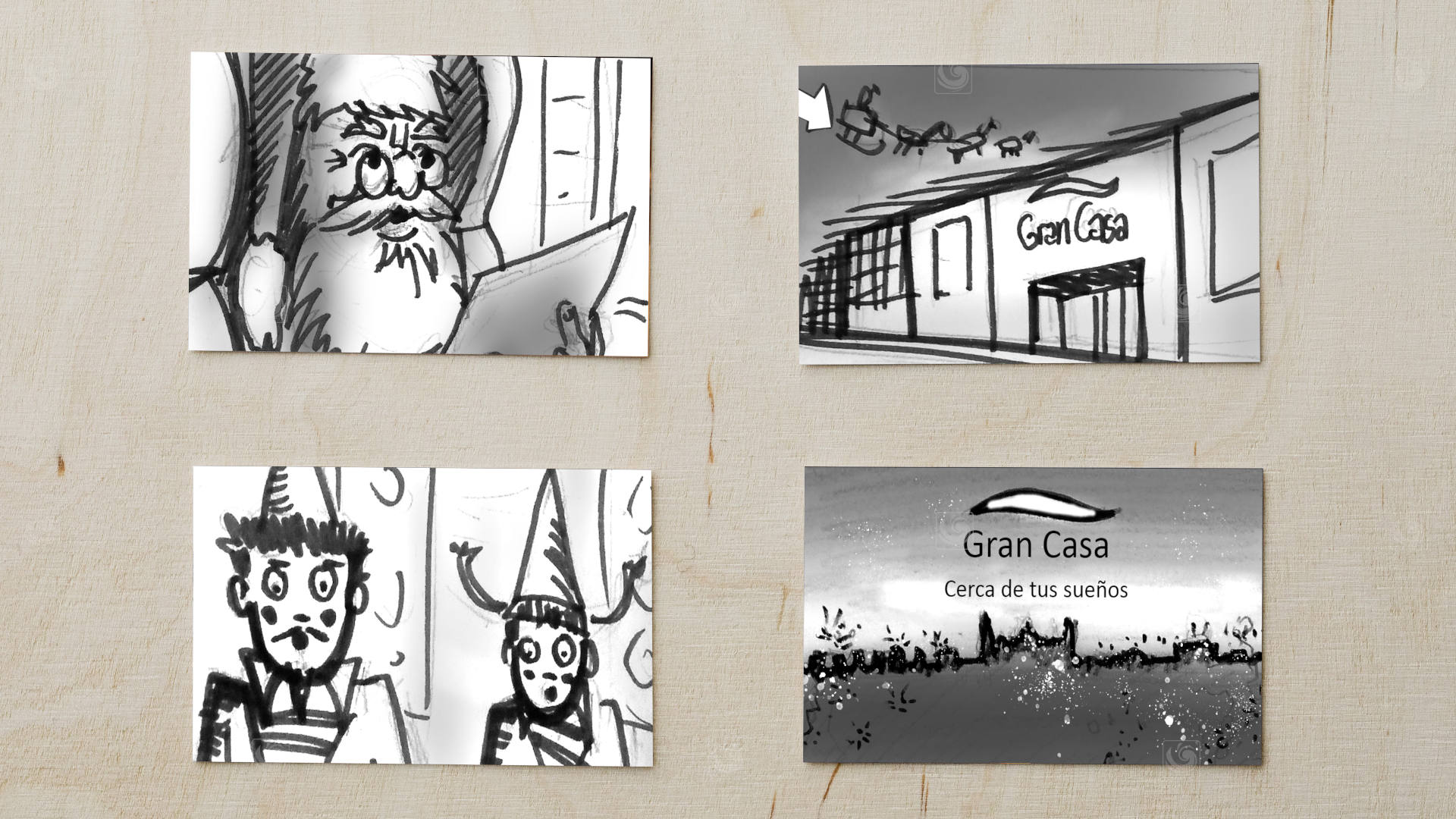 In parallel to the adjustments to the text, the pre-production stage had to advance in the tasks of localization, casting of actors and extras, lighting design and hiring of collaborators in different areas (props, makeup, production assistants, ...).

Regarding the shooting locations, the script marked: Santa Claus' house (exterior and interior), various exteriors of Zaragoza and finally GranCasa (exterior, various galleries and central plaza with its big toy machine). It was clear that for the exterior of Santa Claus' house, no less than the North Pole, we would have to have stock footage, while the rest would be recorded "ex profeso".

As for the protagonists of the story, we had for the role of Santa Claus a very convincing Rufino Ródenas, excellent professional and person, with whom we collaborated regularly. In the case of the elves, the two extras became a dozen thanks to the magic of digital image cloning. 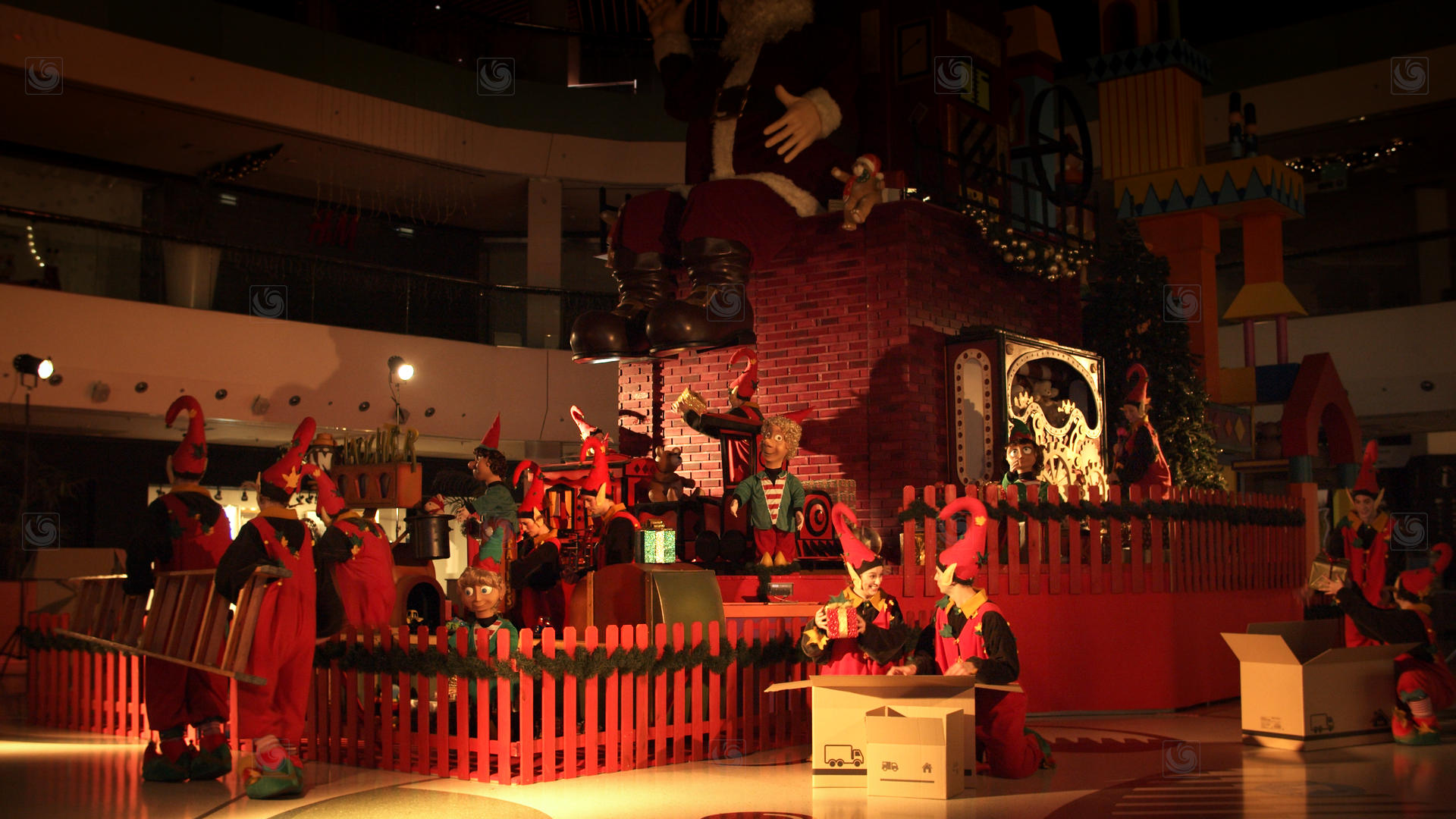 Moving on to the production stage, the recording of the different shots of the audiovisual was carried out over three days, with the one corresponding to GranCasa taking place at night, with the shopping center closed to the public. In this specific case, the narration itself describes the actions as night-time, so it was not necessary to falsify this aspect.

Although the fact of recording indoors at night, undoubtedly avoids having to dedicate efforts to cancel certain undesirable sources of light, coming from the outside; doing it in a place as wide as a shopping center forces on the contrary an adequate investment in terms of lighting of the different locations. 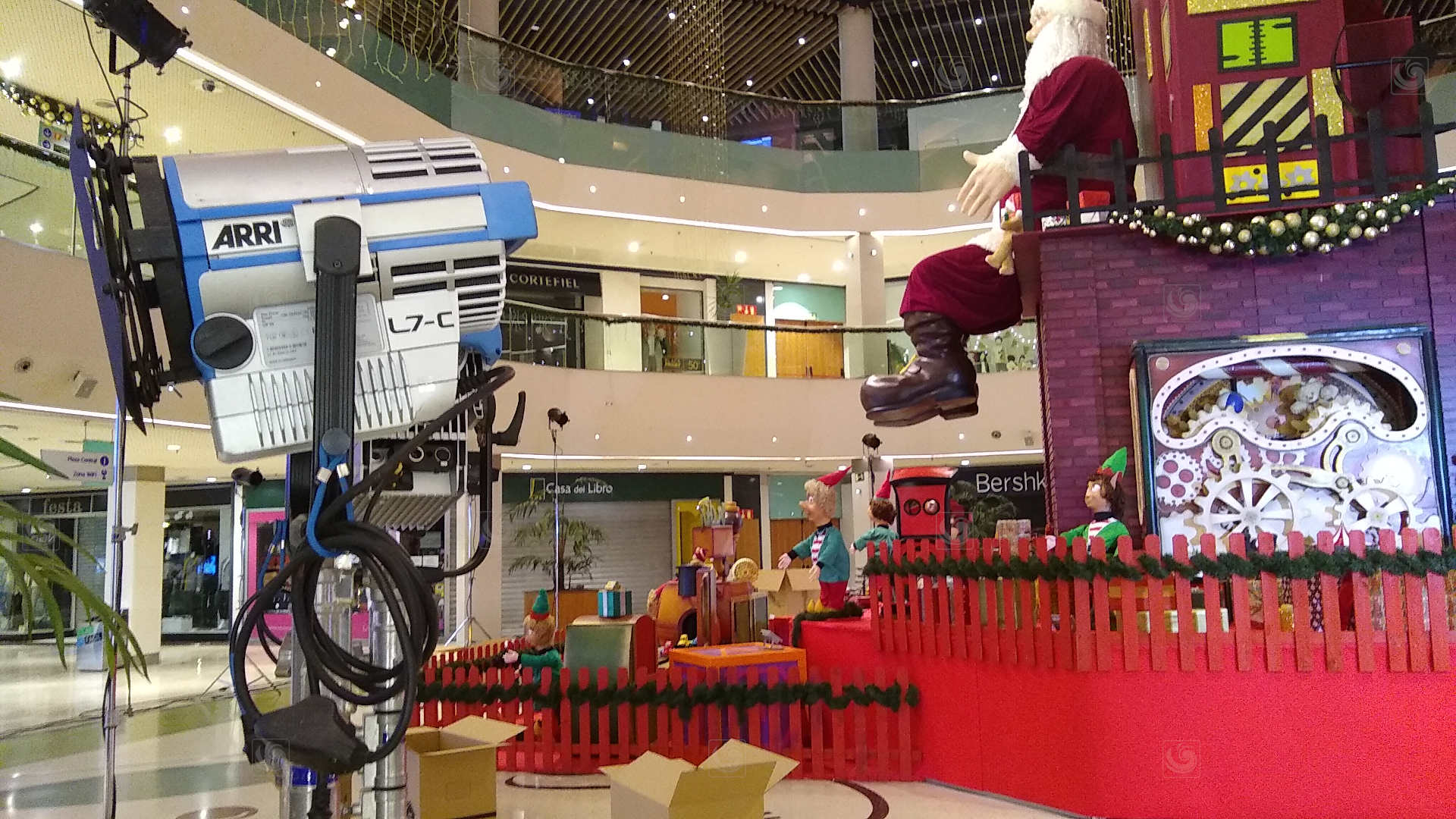 In this last respect, the script played in our favor, allowing us to "multiply" the light power by bringing certain types of spotlights closer to the scene, to the point of showing them, making them pass in the narration through the auxiliary lighting that the elves might be using, in their task of tuning the big toy machine.

Except for the sequences recorded with drone, we used in the recordings a RAW format of digital cinematography, using a Speed-Booster and professional EF optics. 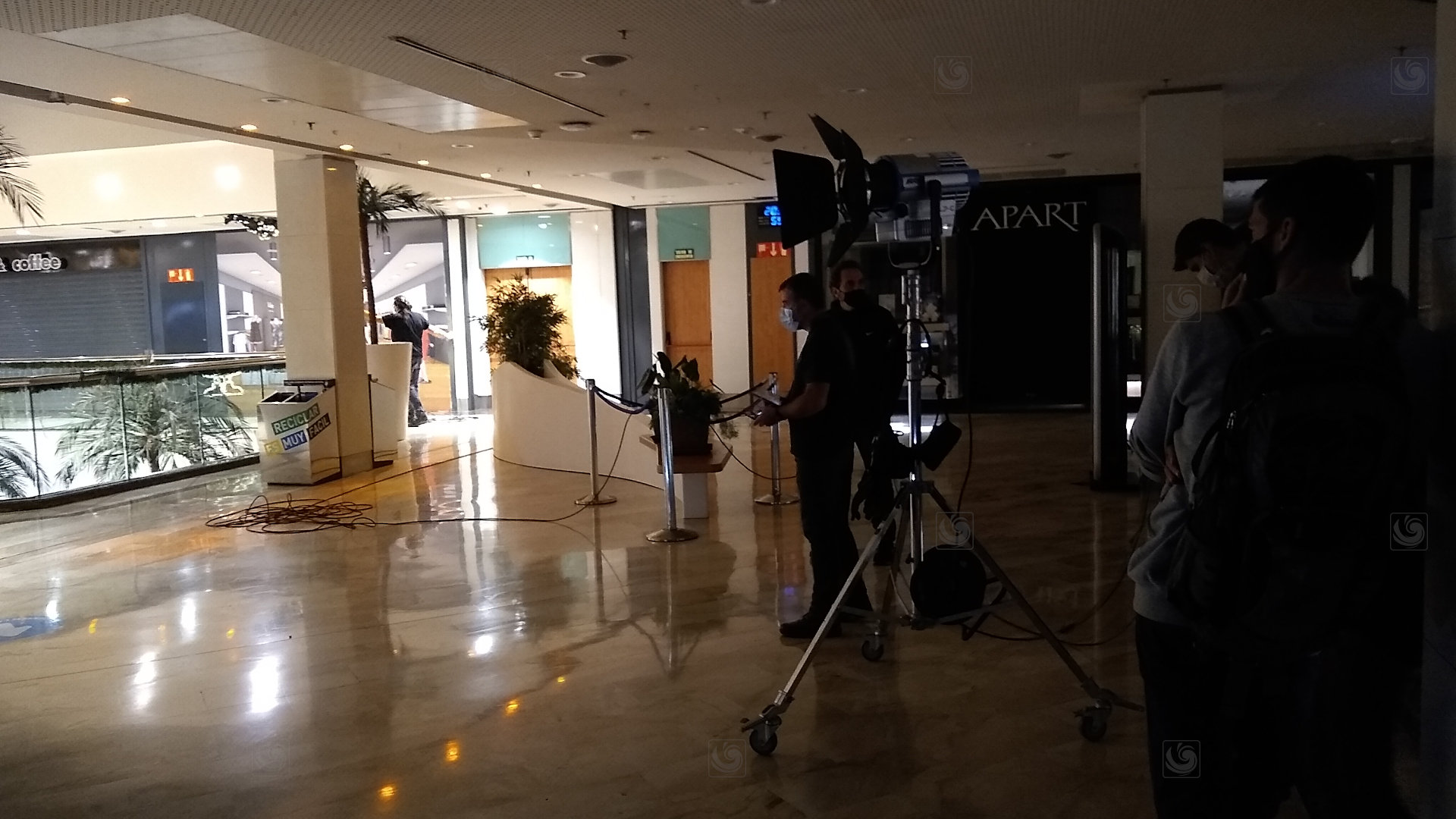 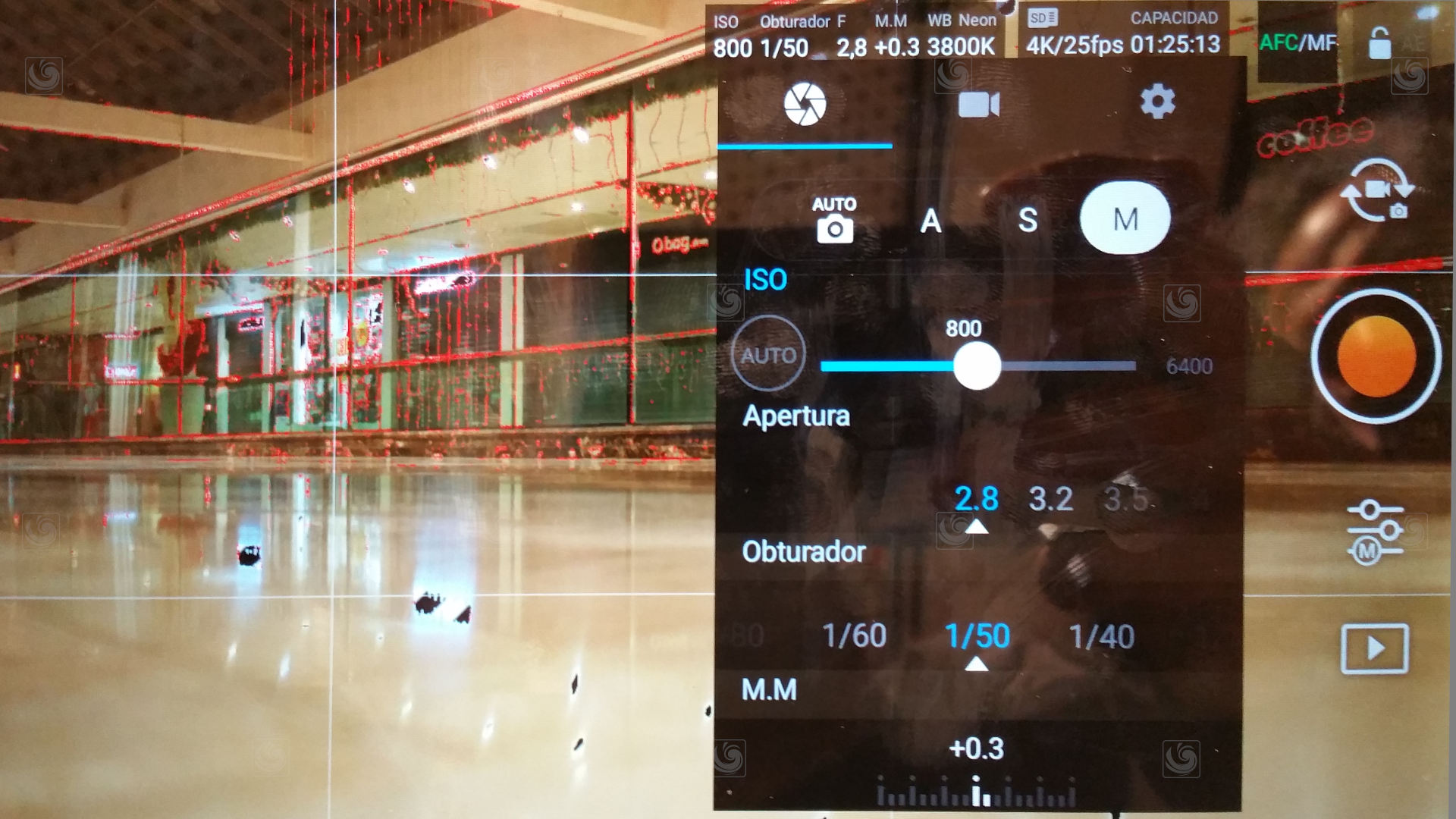 Already in post-production, a fantastic theme as is everything related to Santa Claus, well deserves a wide variety of visual effects. Through different techniques, both 2D and mainly 3D, we materialize the flight of the sleigh pulled by reindeer, the living drawings of the letter, the magic and the light with which Santa puts everything in motion, the flight of the gifts inside the mall, etc. 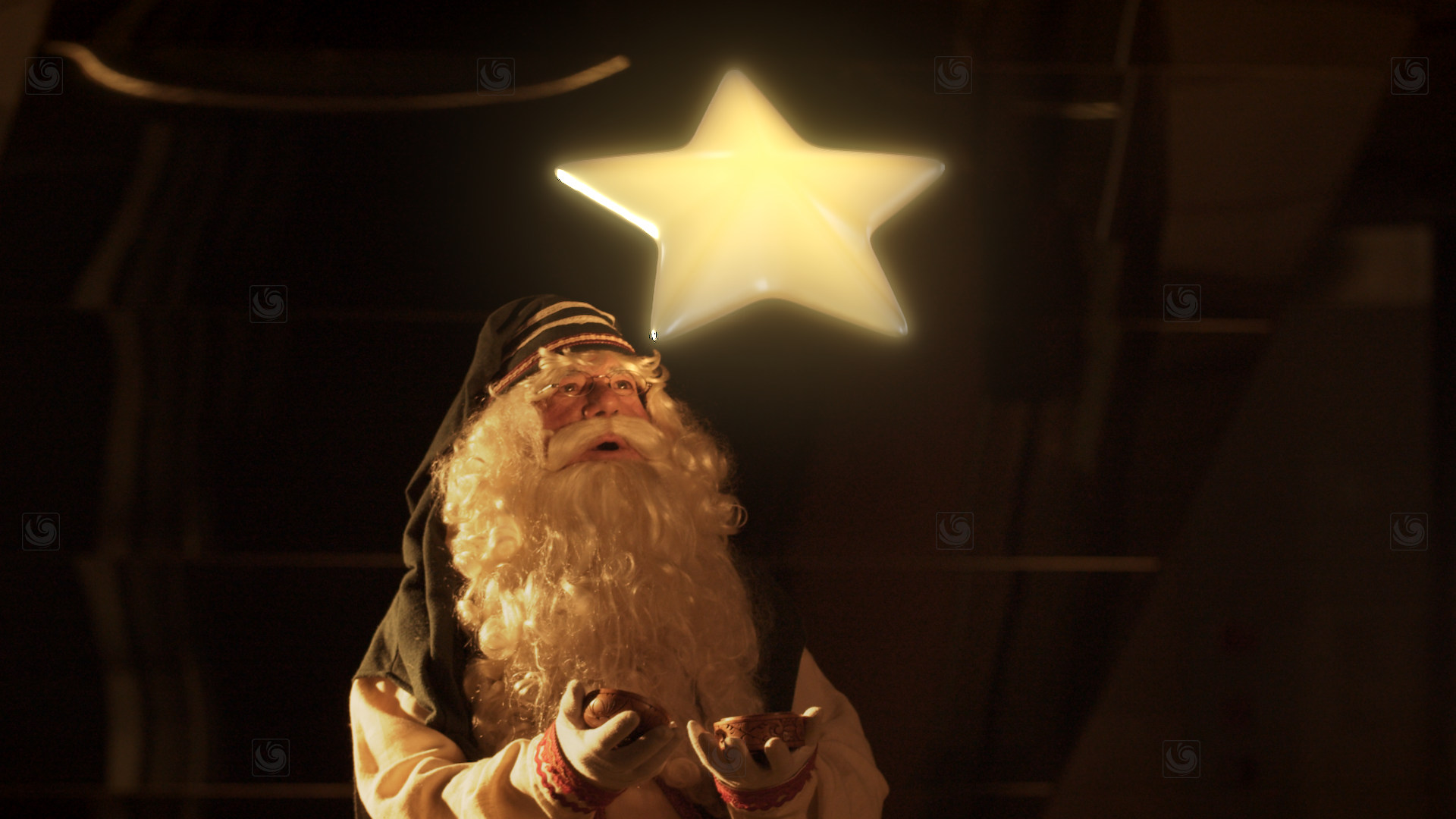 As for the soundtrack design, the key points to be dealt with in this project were no different from the usual ones in all audiovisuals. Thus, in the absence of direct sound, we had to deal with voice-overs, a careful musical selection and the appropriate sound effects.

Specifically, the voice of Clara, the girl who writes the letter to Santa, was played by the dubbing actress Neri Cotillo, while the closing voice of the audiovisual was played by Eva Magaña. All these voice-overs were recorded in our usual sound studio, Estudios Roma.

With respect to the musical setting, a cinematographic approach was sought, and the three themes used conveyed it perfectly.

At this point we are sure that you will be eager to put aside so much explanation and take a look at the video. We hope you like it.