Cáritas asked us to create all the contents, in different media and formats, for their annual membership campaign, under the slogan "Every act matters" (#CadaGestoCuenta).

Moving away from what is usual in various NGOs, the client did not want under any circumstances to move the pity towards the users of their work, always having to be embodied the dignity of the person and the equal treatment between the one who is helped and the one who helps. It was also necessary to value the gesture, the closeness, not remaining in the purely material mediation.

Cáritas is an organization that, regardless of the religious beliefs of each person, has the respect and recognition of society. As its work is well known, it was clear that the accent of the campaign did not need to be on spreading it, but rather on mobilizing that person, who already knows it, to take the final step of becoming a member.

In this sense, at the beginning of this project, the message "become a member because every gesture counts" was the focus of the campaign, which deliberately sought to attract attention through innovative approaches to what we usually find in an NGO campaign.

Among other approaches was the use of designs similar to those usually found in film posters. The theme could vary in each wave of dissemination but the narrative was the same: "Be the protagonist. Help by becoming a Caritas partner".

Obviously, this approach quickly proved to be out of place in the dramatic context of COVID-19; a situation that at the same time put our client in the front line of contention, which has seen a multiplication of requests for help of all kinds, whether of a financial nature, or for advice, or for attention and care.

Thus, the special socio-health situation brought about by the pandemic marked a before and after also for this project, not only in terms of dates of implementation, but also in terms of articulating a message and further development of a creativity. It was obvious that references to the pandemic had to be introduced, but the lack of knowledge about how the situation would evolve in the coming months raised many doubts about the best way to approach the subject.

At this point we decided to focus the narrative around specific cases. Situations of dependency and risk of exclusion, common in the daily life of many people, with which Caritas has always worked, but which were now becoming even more complicated. We proposed to the client a cut campaign, we could say "raw", which we materialized in a series of sketches and with a hint of text layout.

To tell the truth, that was a proposal that we ourselves understood as a vehicle to quickly reach conclusions, regarding different aspects of the approach of this campaign. We like to think of these types of proposals, let's call them "loaded", as a kind of "canary in the mine", a very useful resource when it comes to unblocking situations like the one presented here, where it was necessary to relocate something at the level of message and quite a bit more in the chapter of creativity.

Said and done, after a fruitful exchange of points of view, an approach was arrived at that would finally be adopted, after a rapid series of successive refinements. 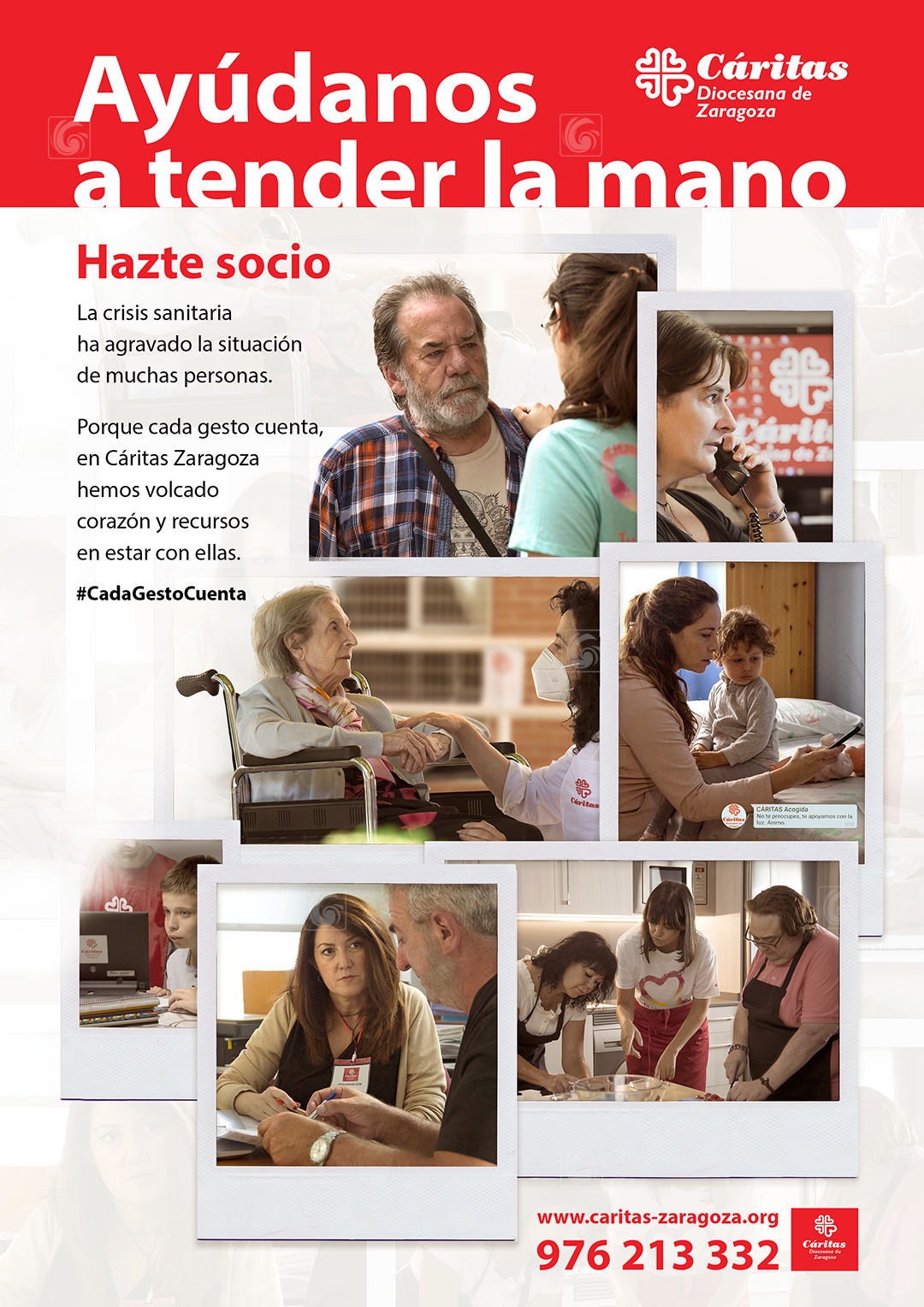 With the ideas already completely clear, the different texts for each of the three campaign waves were carried out in collaboration with the client's marketing managers, both at the level of the script for TV spots and radio commercials, and in terms of content directed at the Internet and Social Networks.

Based on these texts, the production of the commercials was undertaken, recorded over several days, in different locations and with both Caritas personnel and users, as well as actors and extras.

With respect to the design of posters, both for print and digital media, it was developed following the guidelines set out in the Cáritas graphic identity manual, and in the case of content oriented to RRSS, according to the size specifications received from the agency responsible for hiring them in the media. 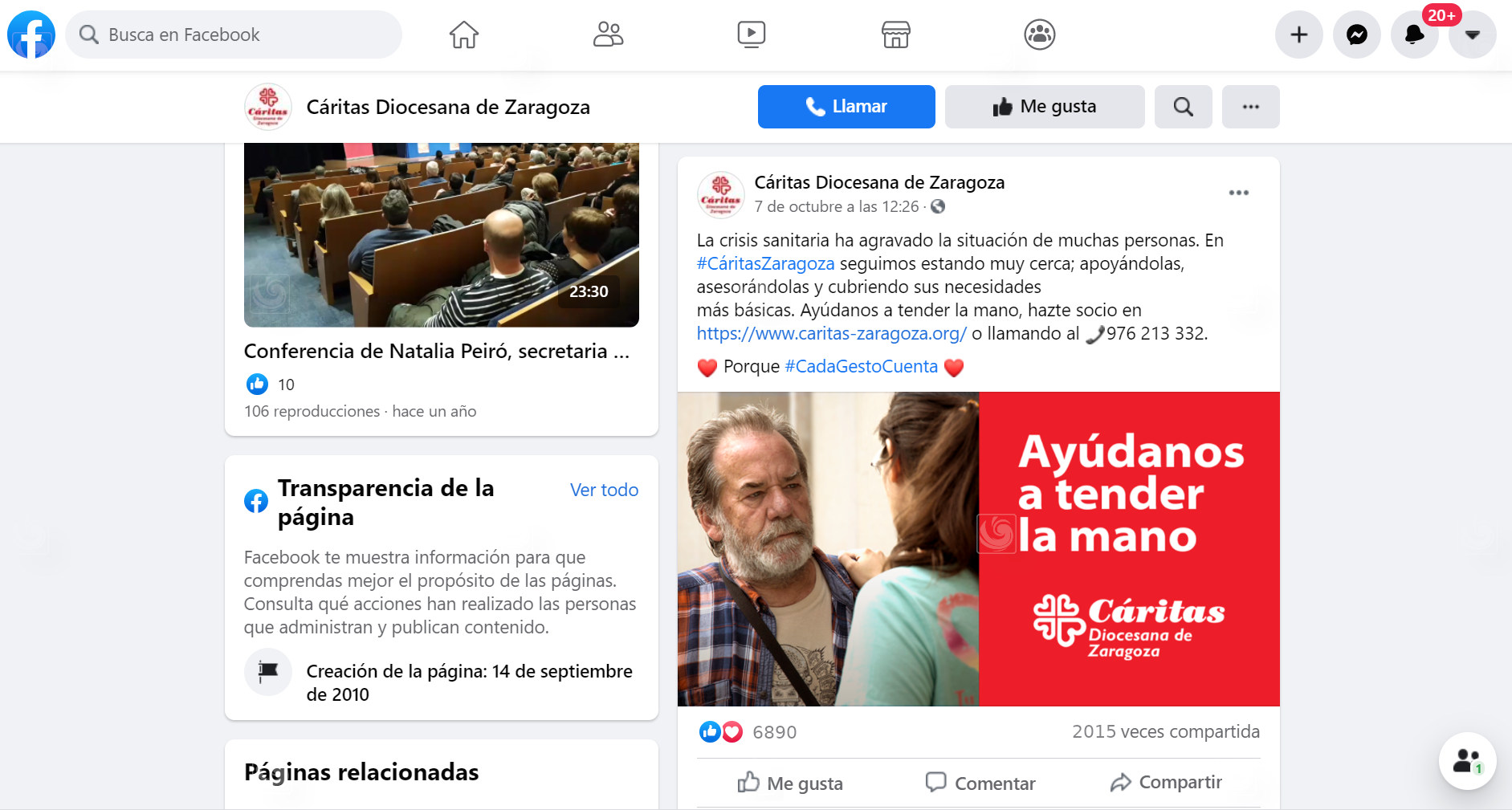